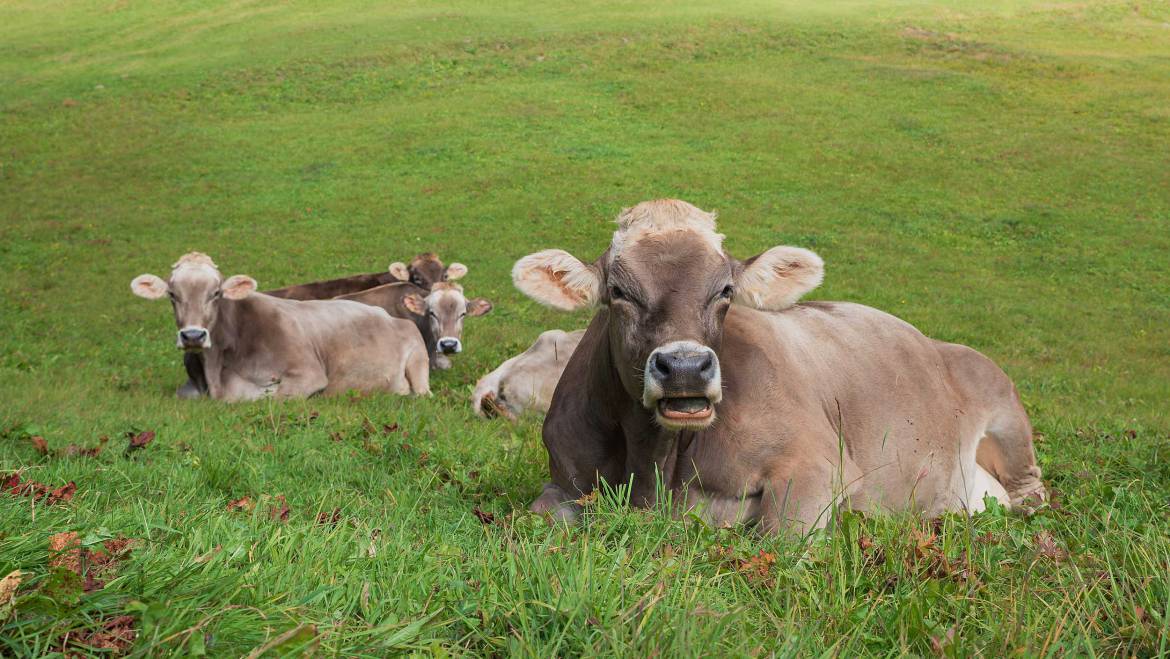 Braunviehis a domestic cattle breed. It originated at the Monastery of Einsiedeln, Central Switzerland, in the 15th century, from where it spread as far as the Tyrol. Since the mid-1960s, today’s Braunvieh has evolved out of the native population through cross-breeding with American Brown Swiss. Apart from Switzerland, where it is found east of the Brünig-Napf-Reuss line, Braunvieh is mainly kept in the South Tyrol region of Italy, the Vorarlberg, Western Tyrol and Upper Styria regions of Austria, and the Swabian and Allgäu regions of Germany.

Braunvieh is still being bred either without or with very little Brown-Swiss cross-breeding as Original Braunvieh (OBV). Braunvieh is a uniform brown or grey-brown in colour; its nose is black and encircled by a pale ring. Its horns are pale with dark points.

Cows weigh approx. 550-750 kg with a height at the withers of 138-152 cm, bulls approx. 1000-1300 kg. Braunvieh (also known as Brown Swiss) is now a dairy-focused dual-purpose breed with a high milk yield, varying according to location from 7,200 (mountain regions) to 12,000 litres a year. Daily gains of fattening bulls are 1.2 kg in the case of intensive fattening. The high milk protein content of 3.5 to 4.5 per cent should be singled out. Braunvieh is number one in many countries in terms of longevity and lifetime yield.

600 years ago: Breeding starts in Central Switzerland in 1870 (the Monastery of Einsiedeln in Canton Schwyz was the best-known breeder): performance of first milk yield tests, export of animals to North America and breeding of larger animals with an improved milk yield (Brown Swiss)

Since 1960s: significant improvement of the physical build and milk yield of European Braunvieh 2011: On 13 December, the genomically optimised breeding values became official for all Braunvieh cattle.

When used as a beef breed:

Braunvieh cattle are solid brown or grey-brown in colour, of a medium size and weight and horned. The bulls are usually darker than the cows. The horn tips, muzzle and claws are dark pigmented. The area around the muzzle and eyes is of a lighter colour. Braunvieh is muscular and rather fine-boned.

Braunvieh cattle can be used for dairy fitness breeding, commercial cross-breeding with dairy and beef breeds, or for suckler cow beef breeding (Original Braunvieh). They have hard claws and good ankles and are suitable for all production conditions worldwide. Therefore Braunvieh can be found in intensive and extensive types of production (suitable for pasture and loose housing).

Montafon Braunvieh, a cattle breed of the southern Vorarlberg, is also part of the Braunvieh family. It is of medium weight, muscular, usually medium to dark-brown with a pale dorsal stripe. Cows weigh 500 to 600 kg, bulls approx. 750 to 1,000 kg. Montafon Braunvieh was widespread in the 19th century but became increasingly similar to Braunvieh through cross-breeding with Brown Swiss.